I recently participated in the Bones kickstarter and while that was going on managed to pick up a Bones Bugbear fig to see what I thought of it. Well I was hoping to paint it and finish it before the kickstarter ended – so much for that idea, but I have managed to do that now. Below are a couple of pics of the model as it came out of the blister. As he material is white it does not come out that well. 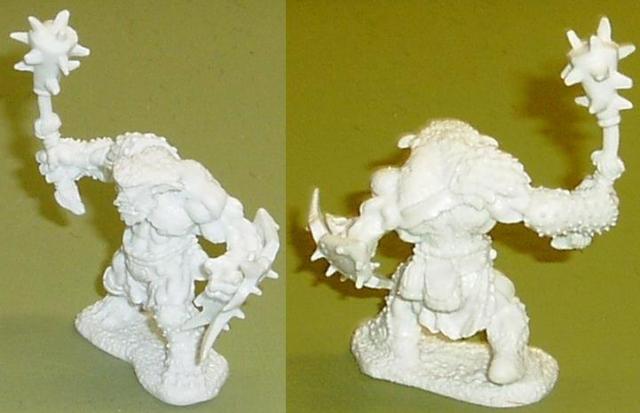 So, I have finally finished the model now. I did as was advised and did not undercoat the model and that seemed to work without issue. You can see the final result below below. I’m not too keen on my basing of this model. I think it needs more, but as you can see it painted up very well – as well as most metals. It’s also much more flexible for being dropped. I did use all my normal dry brush highlighting and wash shades though and they all seemed to work on the figure without issue.

I varnished the model with clear matte varnish. The varnish seems to have taken without an issue and it has come out alright. I also cut the base to fit the 40×40 base. The material is tough but cut able, which is good news.

The basing and colours are so that he will work with the rest of my Warhammer Mordhiem chaos cultist gang which is on the painting table. So he should have some colleagues in arms soon enough.

Overall, for the price I have no complaints with this Bones model and to be honest it’s as good as many lead or plastic ones I have painted. So the Bones figures get a good thumbs up from me. The only complaint I have is the slight bend in the raised weapon. That was how it came out of the package. I’m sure I could straighten that out by putting a metal rod in the weapon if really needed, but I did not see the point in that.

A painter and gamer who has no illusions about being the best painter but likes to play with decently painted toys and have fun gaming
View all posts by mellis1644 →
This entry was posted in 28mm, Bones, Warhammer Fantasy. Bookmark the permalink.