Well I finally managed to get together with Ernie too have our second battle in our Longstreet campaign. The delay was me painting a second unit of Cavalry – which I completed a week or so ago – and posted previously. So here we go with the after action report. It’s been a while since we played so we made a few mistakes but it still was a great game.

So the Battle of the Bayou was on. The name comes from the fact that we had loads of woods on the table and in a moment of shared rules madness, we played all the woods as disordering terrain for infantry and Cavalry for the whole game. Not sure where that came from, but anyway those woods were obviously swampy as well (which is disordering). As this game is set in the start of 1862 the Peninsula seems perfect for these conditions.

The final table looked is below, from the viewpoint of me, as the attacker. The table was 4′ x 4′ but I think next time we’ll need a 6 x 4 table, as we’ll have more units – well the Federal force will anyway. 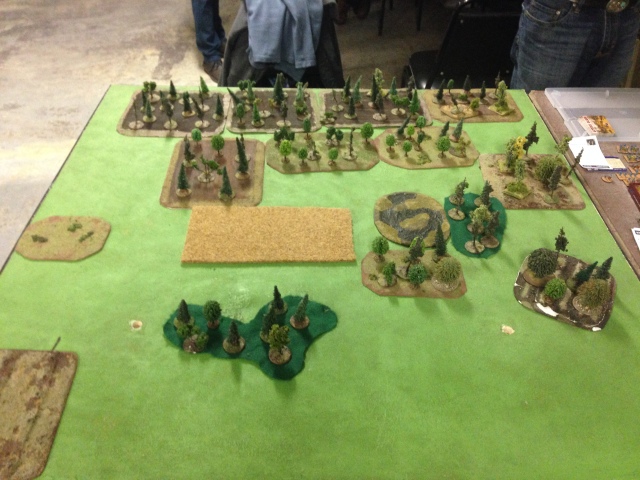 As the attacker I set up first, with my eager recruits units on the right, the seasoned veterans and limbered art in the center and the 2 cavalry units on the left. The eager troops were facing the objective and my basic plan was for them to get to that and win that way. 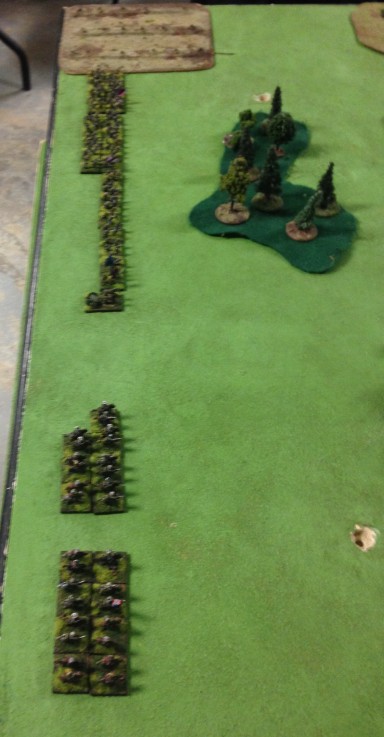 Ernie then set up his Federal units in response. The objective is in the right hand woods behind the corn field, and he had to have one unit in reserve. 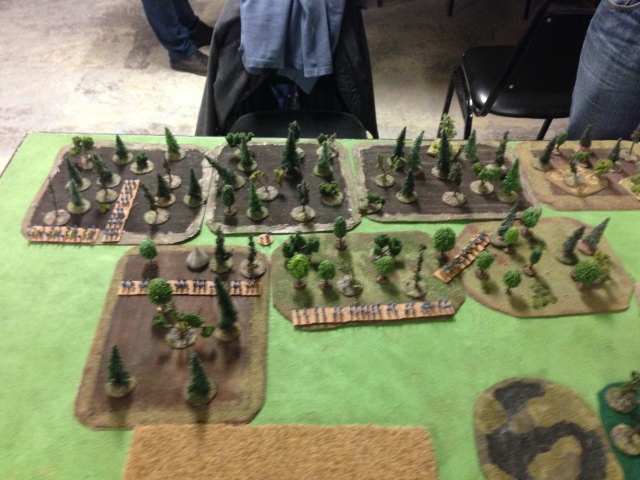 In the first turns the rebel forces did a general advance of all the units – with the infantry units moving straight across the table towards the union forces opposite, which kept in the tree line. 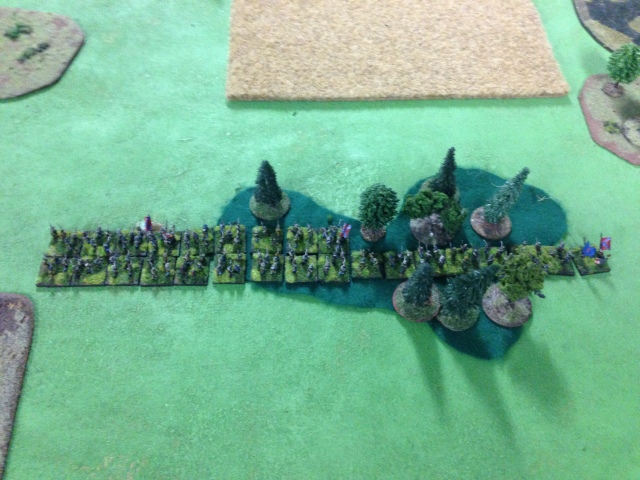 I also moved the cavalry round the other flank, supported by the Art unit moving with them. I had a vague idea to get these into the rear of the union forces – but if nothing else they should distract and bring troops away from the main attack. 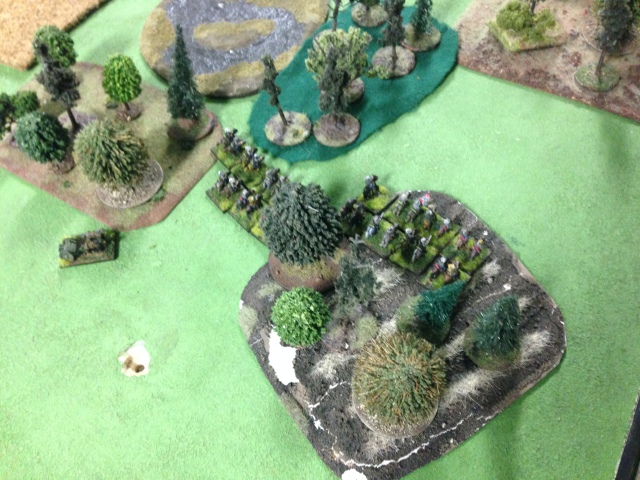 Ernie still did not move his force much, so the my Rebel attack moved forward at pace. Although they were shot a little on the way in by the Union art, the rebel infantry started to head towards the woods. I did force a unit of Union infantry to move forward towards my forces (with a confusion card), but they then moved back again. The first infantry shooting happened at this point with my left 2 units a bit battered but still heading for a ‘Rebel Yell’ powered charge. 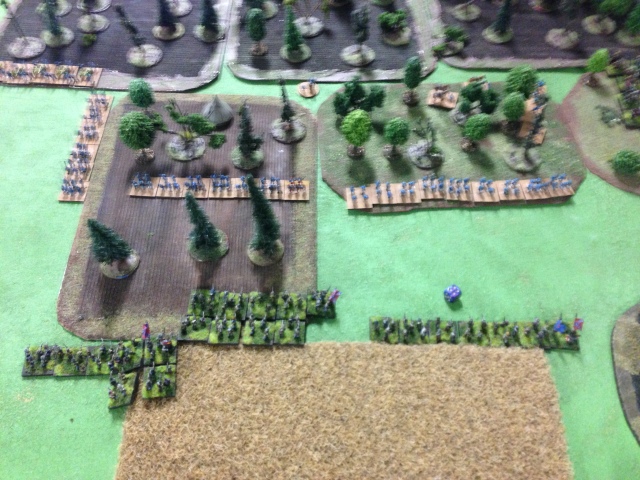 On the other side of the table, although I got in a bit of a muddle with the cav units, I was getting around the flank of the union line, and they had to bring his small cavalry unit to face this flanking action. 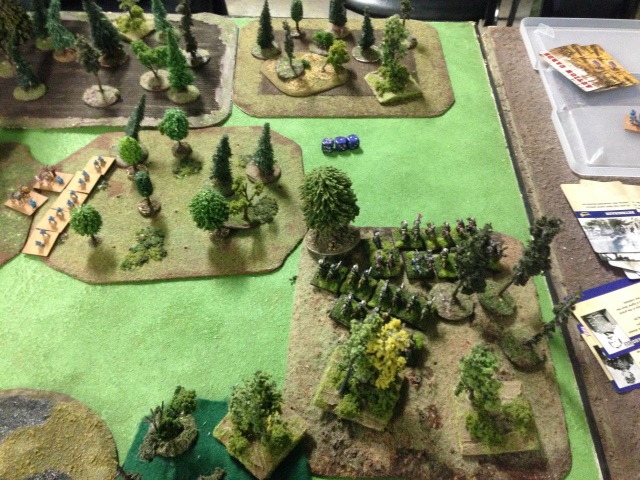 I should note that by this time I had ‘3 Rebel Yell’ cards in my hand before the first shots were fired and I was setting up for a massive charge all down the line to gain EP’s and hopefully start to push the Federal forces back. First of course, they continued firing and taking an odd base from some of the units, while mine continued to move to contact. 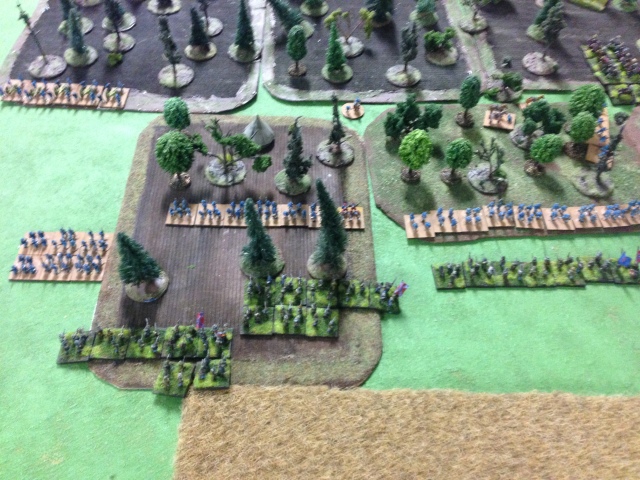 I did try to get my mounted Cav around the back of the union forces to charge the rear of a unit. Ernie was doing a good job of stopping me though, so in the end I decided to add one unit to the initial charge of rebels – mounted charging in the woods and all! 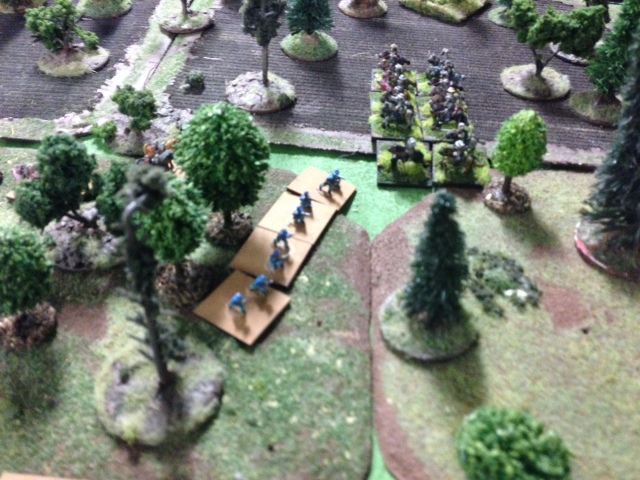 Note, by now the union reserves had come on the table, right where my Rebel cavalry was. I dismounted one cav unit to hopefully blunt their moves/effect on the battle. This meant the reinforcements really did nothing on that side of the table, which was my aim. They lost out to charge orders needed for the other side of the battle, so never got too close to my waiting rebels. 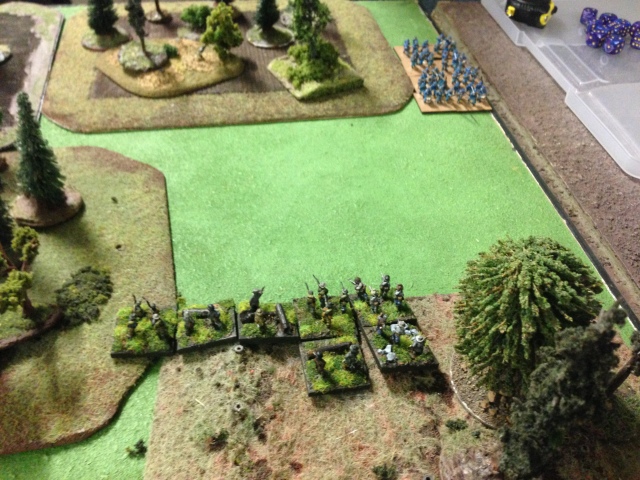 When finally with range, the initial charge was only somewhat successful but did not really push back the union lines that much. It did mean that I had moved a key regiment from the tree line though, so things would start to be fairer in shooting as long as I could stop the obvious counter charge. This I managed to do, by playing a good interrupt cards to blunt Ernie’s initial response. This meant there were some counter charges but not as many as he had planned. More luck than skill really, but I’ll take it. What followed was charge and counter charge  moves in the woods on the left flank, with this becoming the focus of the engagement for us. This also saw the first hero’s being formed – one for each side! 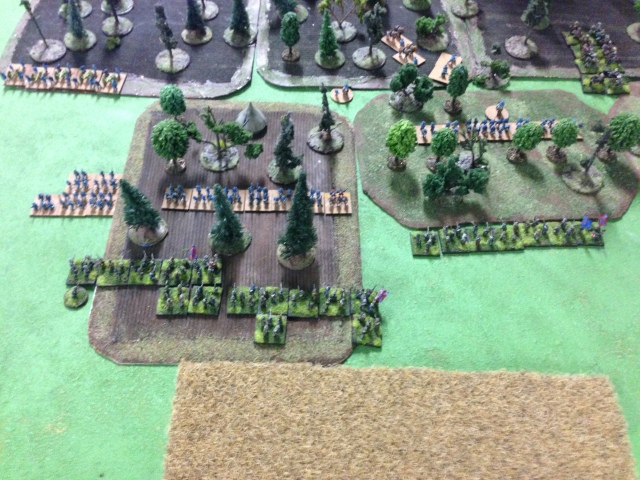 I was slowly pushing the rebels into the woods, but the fights were very even. Of course this is where I did not take too many pictures as I was fully engaged in the game.
Finally in one of these melee’s though the end result went badly for the union troops – not the casualties caused but in that they fell back beyond the objective. This was in their attack. So it was my turn next with the objective open for me to take! The dice and card play had kept the melee’s from being dramatic wins for either side, but the dead boxes were growing – with both of us having approx 10 bases dead. 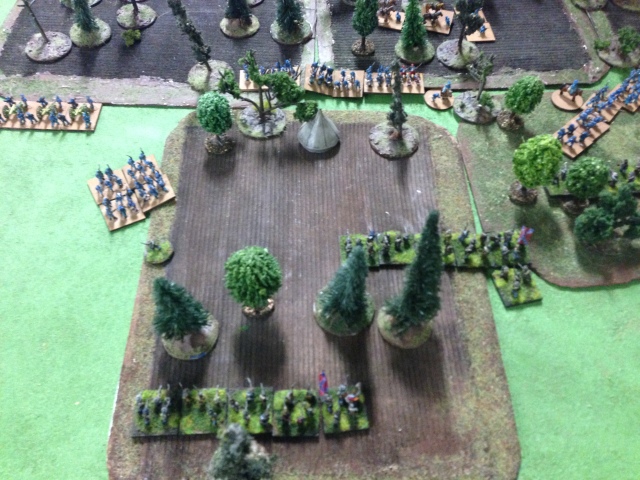 With this I moved up my units used their muskets while taking the objective that turn. At the end of the turn I just rolled enough to claim the victory, so that was it, the aggressive charges had worked! The positions of bases on the table looked as below, from left to right. 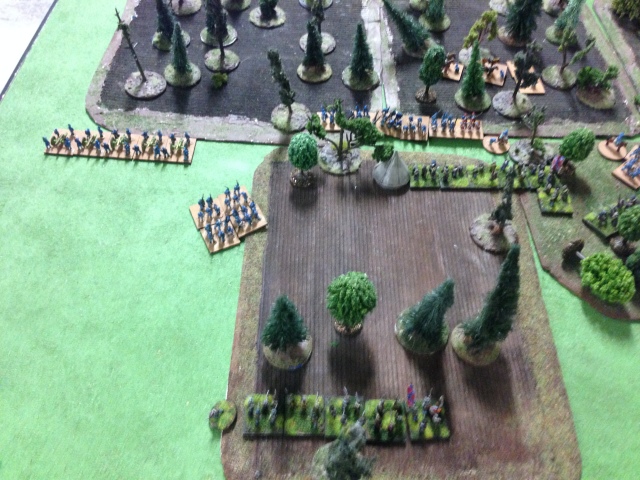 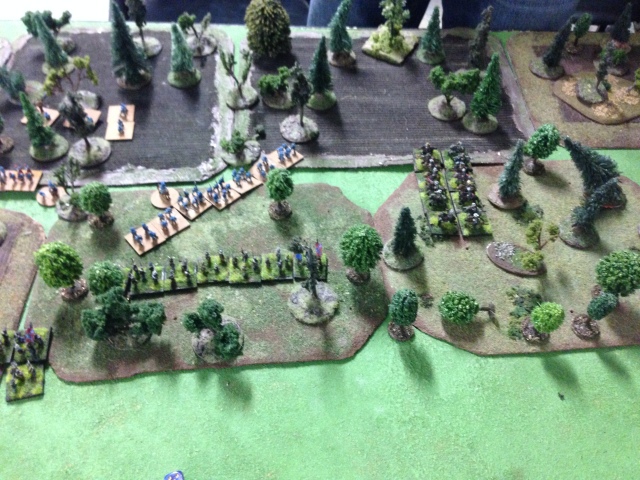 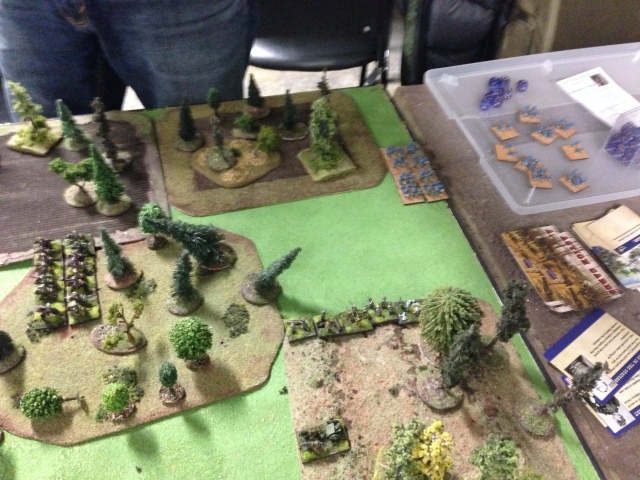 So, a rebel victory and this highlights how important the objectives are to me. We were roughly equal on dead and so that really made the difference. I’m enjoying these victories while I can. I think by ’64 things may have turned around a lot for my force, but we’ll see.

It is the please and honor of this paper to bring you news of another victory for our brave Southern solider in the Peninsula. Colonel Hector Archibald and his Georgia men have done themselves proud again, defending Richmond from the advances of George McClellan’s forces.

As we have been reporting daily, the northern forces under the Young Napoleon have been making a slow advance towards Richmond. Joseph E. Johnston has been putting up a steady defense but failing to move against the Federal forces. Although this paper has criticized the General many times for this lack of courage and commitment in action against the Army of the Potomac, it is great to see that individual commanders do not share the timidity of their commander.

One such divisional commander is Hector Archibald, who yesterday saw an opening in the advancing lines and immediately went on the offensive. Spotting what he thought was a weak point in the Army of the Potomac advance – in a swampy forest area on the Peninsula, the commander sent his troops advancing to break up the Northern supply lines. This area was defended by a single division, and although they put up a strong fight, the character of the southern men shown through as they made multiple attacks against the Union forces, who were hiding in the swamps for defense.

Some of the Georgia men in Archibald’s command are born and brought up in the south of that great and noble state. So have been weaned on the bayou and that type of swampy forest. This allowed them to carry the day and route the union forces. Huzzar, Huzzar and again Huzzar for the brave soldiers of Georgia!

The victory in the field made the Federal forces literally falling and climbing over themselves in the route towards firmer ground. Many Northern soldiers, especially from the Rhode island and New York area’s were captured in the following pursuit. We expect those prisoners will be heading for the prisoner exchanges which have been occurring regularly so far.

This victory has put a hold to the Young Napoleons advance for now, and we wait to see if General Joseph E. Johnston makes use of this opportunity given to him by the aggressive and independently minded actions of Hector Archibald and his men. Our hopes are not high though as already days have passed since this victory and we have heard nothing from the General.

So at the end of the game – in the wings place to be precise ,we did the campaign turn. We did a few things wrong in this section and I had to redo my changes a little but are slowly learning the rules of this phase of the game. Doing it with beer and food after the game is more sociable, but does not help with following the rules. Ernie’s force was down a lot in the camp phase – obviously the pursuit after the battle was not good for the union forces!

But, those union recruits keep coming from the North so he gets more large eager units, and in the end our forces look very different after 2 games. My guess is they are still somewhat equal in fighting strength though. Thus far the campaign cards system is making for interesting and fun forces – which is what it’s all about.

The changes that were made to my force were:

The changes that were made to Ernie’s force were:

I look forward to our next game- which will be set in later half of 1862.

A painter and gamer who has no illusions about being the best painter but likes to play with decently painted toys and have fun gaming
View all posts by mellis1644 →
This entry was posted in 10mm, After Action Report, American Civil War. Bookmark the permalink.

2 Responses to Longstreet campaign game 2 – Battle of the Bayou, 1862