Well a couple of weeks ago now we tried out this game. It’s a fairly simple Weird Wild West game, but with loads of character for the weirdness of a fun background. That background is that Dracula moved from Europe to the US in the civil war and eventually has became the president of the Union. Obviously, magic works in this version of the world. So we have Dracula’s minions running around and a faction trying to stop them. As well as that there are the native indians with their own magic and the defeated south can use unspeakable magic to continue the fight as well. That in summary allows for various magic sides as well as standard wild west stuff to happen.

I have always wanted to do more Wild West gaming and I have a few 28 mm models now done – they will get shown here soon in detail soon. I wanted to get them on the table and try this game out though. So with a couple of the guys we tried just a basic game – just with wild west, no weird stuff and really enjoyed it. So I thought I would do a quick write up and share some pictures as well.

The scenario we played was one I made up. In our of the local store one of the tables is of ancient ruins there is a ‘wishing well’ in that. So putting that in the center of a 4×4 foot table that became a wishing well. The scenarios was that at a certain time someone tossing a coin in the well will be lucky. So knowing this 3 groups of cowboys fight to be alone by the well at the end of the turn to get that luck (no impact in game for it). If they do they get a victory point and the most VP’s win. The well is only magical for 8 turns – which gives a nice limit for the game. The advantage of this scenario is it means everyone has to fight, with no hanging back too much as otherwise that player won’t have any chance to get any VP’s. In many ways this was more of a pulp than wild west game but it worked to test out the rules… 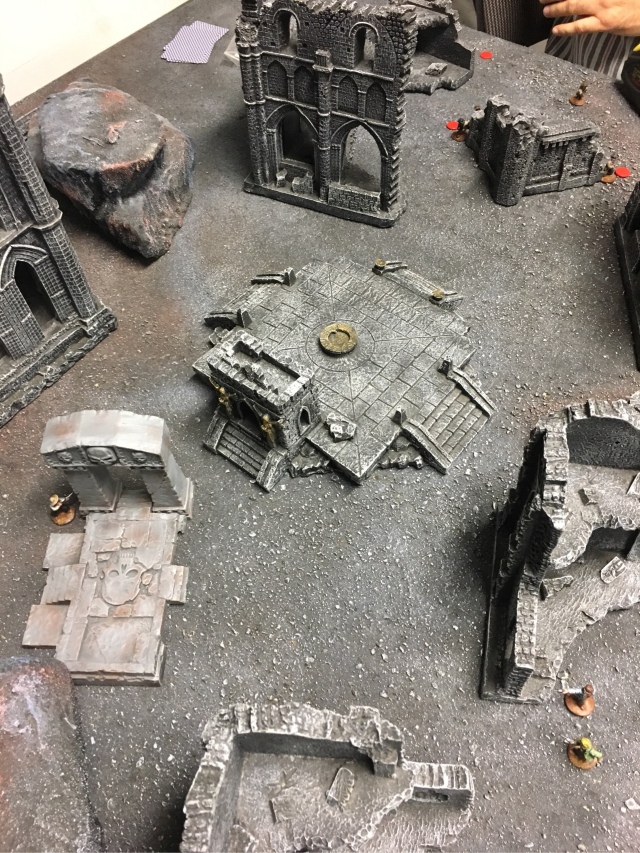 The basic force creation was used. This is very simple for this game – by the rules have much more advanced ‘dollar price’ creation rules. But this was a quick intro game after all and allowed us to play without working out complex forces.

The basic turn sequence of the game is controlled by playing cards. Each player has a hand of half the number figures on the table (rounded up).  So my 6 figures gave me 3 normal playing cards. Each player has their own activation deck to draw from. Then in a round each player selects one card and that’s used for the initiative order for that round. Higher cards go first and all back cards are worth more than red ones. Once you go you have 2 actions to assign – one figure can activate twice or 2 separate ones can activate for a single action. Then back to a card selection for the next round in the turn. Figures can only be activated in one round in a turn so there is a decision point as to which figures to move and when (and which to use a double activation on and which not too.

Actions are moving, shooting, melee, reload, cast a spell or go on overwatch etc. The mechanisms are nice and simple with figures being rated from D6 (standard figs), D8 (veterans) to D10 leaders and highly skilled/powerful. You typically roll 3 dice looking for 5+ on each die for success, and if you roll the highest value on a die then you get to re-roll a failed die. Modifiers add or take away the number of dice rolled not the target number. The more successes the better the success.

If you are hit then there is saving throw mechanism to save the target depending on the level of success the opponent rolled. If shots all miss then there is a chance of needing to reload weapons as well. Overall, the mechanics are fairly simple and by half way through the game we all had them with little need to look things up etc.

So in out test game we each started in a different section of the table. It started with most figures sneaking around and getting into good locations to shot each other. We used red markers for a figure which had moved and blue for overwatch – just so when you look at the figures. 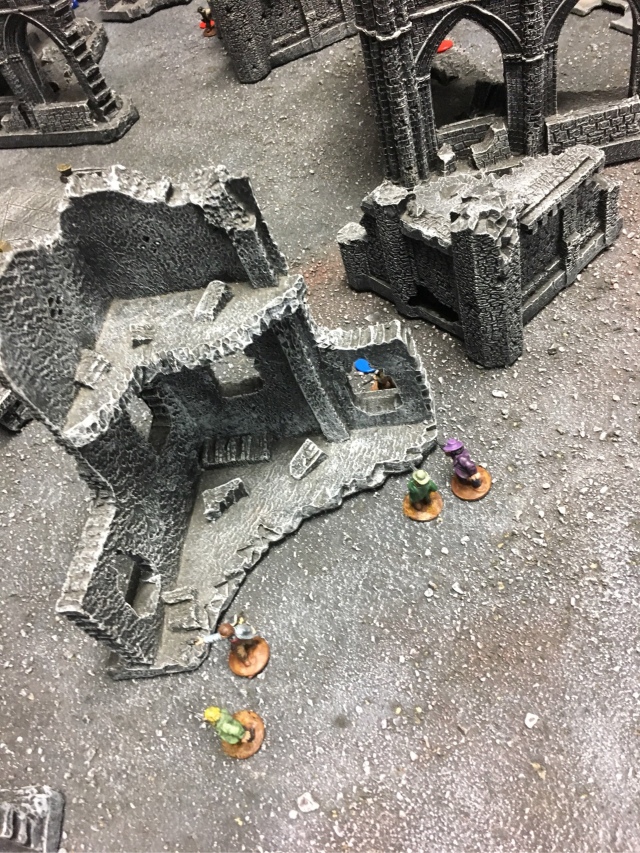 The first turns were more about getting the mechanisms down and getting into good shooting position. Although a few shots were taken no one moved that much or did much harm to other. A great deal of hugging the rocks and ruins was happening with long range pot shots.

I decided to see how deadly or not the game was (well that’s my excuse anyway) and try and do a dash for the well to get a VP to two…This was with 3 of my gang, so half the figures.

However, there was a Mexican with a rifle who with some great die rolls showed that this was not a good move – and one of my guys was down and out in the middle of the second turn. I had a couple of other guys now in the open and exposed, maybe this was not such a great move. By the end of the 3rd turn all three of my guys were off the table or on their backs with an injury. So that did not go well – note to self, running into the guns is maybe not the best move in a cowboy game… 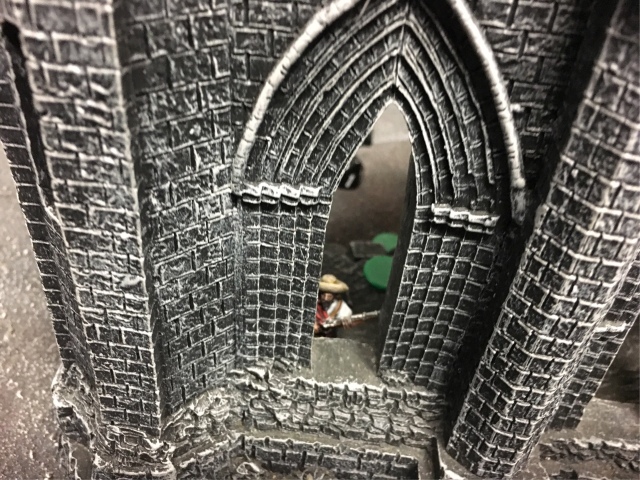 Meanwhile the trench coat robber gang crew were moving steadily towards the center – a nice set of turns meant they protected each other and were keeping close cover as well. That seemed to be a much better tactic than the charge for the objective style I did. They and the 3rd gang started trading shots, especially I think as with half my crew out of action I looked less of a threat to either of them. 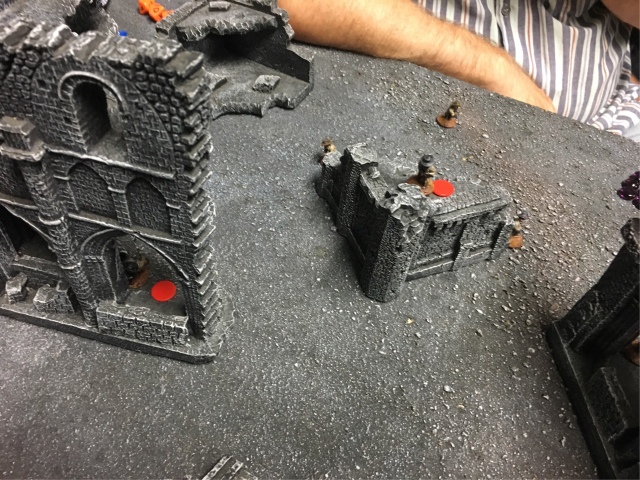 So after the couple of turns of sniping between the other players and my failed rush for victory, I was being much more careful with my guys. However, my aggressiveness won out and my leader sneaked around the edge of terrain to get behind the robber gang. He did succeed on this and took out a member of the that gang, but the others had moved too far. On his own I did not want to risk another ‘run into the guns’ move so he headed back to the rest of my gang.

At this point I was down to 2 active members of the gang – but due to the the 3rd member being injured but not out of it yet, I got 2 cards for actions. This was ok but still I need to be careful in my moves and play it wisely (not one of my better traits at times).

Now with the half way mark in the game being passed the game started to get nasty. The other two gangs were started making a run for the well and the victory. The little raised platform which housed the well became a bit of a killing ground with various figures trying to get to the well and getting shot down by others. My guys of course joined in the fun. In many ways this was typical cowboy movie stuff and so got us all enjoying the game, with the risk/reward of trying to win coming out.

In the end Mark managed to get his leader in position and still alive for the end of one turn and got a victory point. Note, in this close action the shotguns really came into their own, with the pistol guys getting their fast shots but the close in power of the shotguns clearing the area a couple of times.

The next turn Mark’s leader was down though and it looked like the robbers may get a VP as well with their guys clusters around the stairs to the well platform. However, this is where I came in and my took one out some of the supporting robbers. However, this was my swan song with my leader – as he also fell in a hail of bullets.

The last turn of the game slimed down the gangs even more – by this time I had no figures left and the other gangs were down to just a couple of models each.  No figure was able to reach the well so they just shot at each other! In the end Mark won with a single VP – his leader being the only one to get to the well.

Overall, we all had a fun time and really likely the system- it’s complex enough for tactics to matter, but simple enough that the system itself does not get in the way. There are enough weapons and spell options which means that this will have some depth as well. It also has an interesting campaign option as well which allows gangs to develop over games – if that is what you are interested in. There are now 2 extra books with more factions and rules, especially for horror elements. I believe we’ll see more of this game on the table and I know this has started some cowboy painting already with others in the group. So I think it’s worth having a look at this rules set if you want some weird wild west or even just wild west gaming – as the weird elements can be removed.

A painter and gamer who has no illusions about being the best painter but likes to play with decently painted toys and have fun gaming
View all posts by mellis1644 →
This entry was posted in 28mm, After Action Report, Pulp, Review, Wild West. Bookmark the permalink.