This is a follow up on the previous Guardians Chronicles game blog post, as this one shows the remaining models from the game. These are the hero and the main villains. The models are not great but are so much better for being painted – even to my mediocre standards,

So first we have the four hero models. The models have obvious names – from left to right Golden Boy, Sergeant Freedom, Adam Spell and Super Nova. Typical hero stuff but heck they work. You may notice I did all their bases grey so they would stand out from the baddies on the board a little more.

Then, we have the villains (boo hiss etc.) and the one companion for the Heroes to save, which are shown below. Again from left to right these are Kinoichi-chi, Kinoichi-ki, Kinoichi-noi, the big bad Doktor (their spelling) Skarov then Alison in her two forms. She is a companion that the heroes sometime have to try to save in a scenario and if they don’t then she transforms into the right most figure – a Mutated Alison – when the Doktor succeeds in his nasty experience on her.

As I mentioned in the previous posts these models are not the greatest and are a little smaller than 28mm. But this was a gift from a friend so I can’t complain. I also found the color scheme for some of the models (Adam Spell especially) are not the greatest for my painting level, but heck at least they now are ready for a table top level. The figures or their painted results are not going to win any prizes, but I was more interested in getting these ready for the table than making them prefect.  The quality of the models is poorer than the Zombicide ones, so I had little interest in really spending a lot of time getting them prefect.

The gallery below shows the heroes. I think this is the best way of showing them as they are not that great, but they work on the tabletop. You can click on them to see bigger versions of the pictures in desired. As I mentioned the Magician Adam Spell – the guy with a dark suite on was not an easy model to paint as the artwork for him is mostly blacks and grey which can be hard to do well on figures. 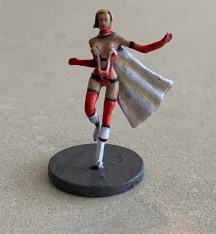 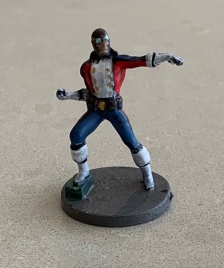 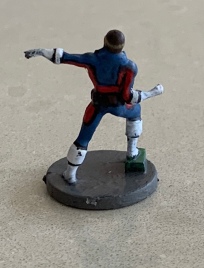 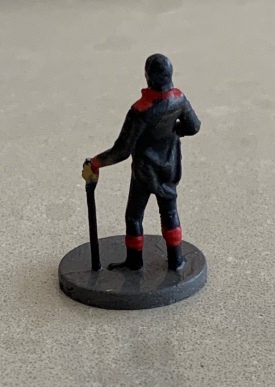 Next, I’ll show the various version Alison. I did her as a black base vs. the grey of the heroes so that they are easier to tell her apart in the game. She holds a folded US flag which was an interesting painting challenge. I think it came out ok (for my level of skill) but it’s far from good. I realized only when taking the photo’s I did the normal figure with red eyes as well… maybe she is angry at the heroes. 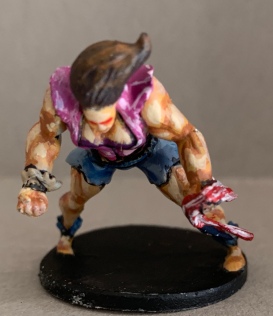 Lastly, the Doktor and his three cybernetic clone lieutenants. The Doktor is a typical villain pose and so was reasonable to paint. He is the big baddy in the game. The person playing the villains plays all these and the androids shown previously in the game.

Each of the Kinoichi clones has a different color hair and different abilities in the game. These cybernetic clones are quite small – more like a 15mm figures really. They are black/grey with the white masks which can make them challenging to paint. So although not perfect this paint job works for the the game models.

Overall, I’m not really wonderfully happy with my paint results but, equally the models just don’t inspire me or make it easy for someone of my skills to do a lot better. So they will do ok for the game for now. Now to read the rules and see if the game was worth the painting effort

A painter and gamer who has no illusions about being the best painter but likes to play with decently painted toys and have fun gaming
View all posts by mellis1644 →
This entry was posted in 28mm, Board game, Superhero and tagged Board game, Guardians Chronicles. Bookmark the permalink.