A long time ago – well over 2 years ago, when I had finished my Maurice forces I bought some 6mm Vietnam figs to paint up and play the ‘Charlie Don’t Surf’ rules from the Too Fat Lardies. Now, that project kind of got sidelined and the figs have been kicking around my painting desk for a long time. Most still in packets but a few somewhat completed or at least based and undercoated. So last month I decided to pick it up and give this idea some loving again. Below you can see the first finished group because of that. This is enough figs for a small Main or Local forces for the Vietcong. These are the South Vietnam local communists. Their ranks were decimated in the military failure but PR successful Tet offensive of ’68. After that they existed but the NVA regulars became more and more of a factor in the day to day execution of combat roles.

The CDS rules are actually set up typically for 15mm figs but can be used for 28mm to 6mm gaming. One item in the rules caught my eye though – that they use a 6mm 1 to 1 ground scale. That means that when using these figs and bases it will mean the gaming is really WYSIWYG  (that’s ‘What You See Is What You Get’ for non computer people). That means there is no scale offset from the figures and weapon ranges/movement to the table & terrain, one thing which normally bugs me if it’s too extreme. I will have more of a challenge for doing nice terrain in this scale but heck it’s worth a try.

I based the figs on 20 x 20 mm bases as that way they are usable in a playable game – easy to pick up and move etc. They are based in various combinations so I  should allow me to use a variety squads sizes. I should even be able to use them for Ambush Alley in 6mm if I really want too.

The basing also allowed me to put some ‘realistic’ grasslands/bushes on the bases which means that the figs kind of hide as well. That’s what the real guys always wanted to do so that makes sense. I’ll likely use a little less of the foliage  on US troops as they are more likely to be in the open.

I have mortars, heavy & light machines guns plus some recoilless rifles as well as normal infantry bases. Many of the heavy weapons in reality had more support figs than are on the bases but depending what else I do I can either just ignore that or use spare infantry bases for the extra figures. I did some figs on round bases which are UK pennies and 2 pence pieces (collected when I was last over there). These will be used as the commanders or leaders of the forces – ‘big men’ in the CDS game. You can see a couple of the more specific shots of the figs below. 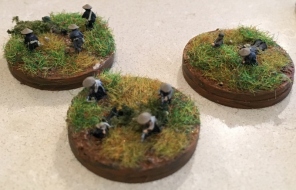 This will not stop me eventually doing my 15mm Vietnam stuff which has sort of been sidelined as well. I do have a quite a lot of that stuff as well. But, I hope this will be a much quicker way to get some bigger Vietnam games on the table. I plan to be game ready in a month or two – the US troops (and helo support) are the main ones to finish and maybe some more regular NVA figs. This does get a long stalled project moving, which is good. Oh and I did think that even if I rarely play with these and end up selling them they should get more painted than I ever would just as packets of figs.

A painter and gamer who has no illusions about being the best painter but likes to play with decently painted toys and have fun gaming
View all posts by mellis1644 →
This entry was posted in 6mm, Vietnam War. Bookmark the permalink.